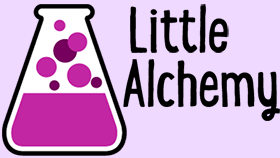 Have you ever dreamt of being an alchemist, whose works are excessively unbelievable? In this Platform and Thinking game Little Alchemy, which is developed by the amazing game developer Jakub Koziol, you will have the chance to work as a real alchemist. However, you will not start with making legendary things such as a Fire Bird or Everlasting Dose.

In fact, the game takes you back from the beginning of human beings, when there are only four basic elements such as Air, Fire, Water, and Earth. Starting from that point, you will have to find new elements such as Lava, Mud, Steam and more. Sometimes, the game allows you to make up weird kind of stuff that contributes almost nothing to your game progress such as wall or brick. Advancing in Little Alchemist and you will have the chance to find new exciting elements using the hints (or cheats) that the game gives. Just imagine a world where you are the first to invent electricity, energy, glass, metal, stone, sand, tree, sun, sky, tool, and space…

You may not believe it but the list of elements you can make up in Little Alchemist can be longer than the distance from your actual location to the sky. The list of things such as wild animal, fruit, livestock, plant, paper, wood and even human are perfectly included in the game, which makes Little Alchemy better than any game you have ever played. Come and play it now!

Use the mouse cursor to drag the elements from the right to the left.

When two factors do not match, they turn into nothing.

At the beginning of the game, Fire is the factor that mostly contributes to the appearance of new elements. Keep an eye on it!

We've detected that you are using AdBlock Plus or some other adblocking software which is preventing the page from fully loading.

We don't have any banner, Flash, animation, obnoxious sound, or popup ad. We do not implement these annoying types of ads!

We need money to operate the site, and almost all of it comes from our online advertising.

Please add the-impossible-quiz-game.com to your ad blocking whitelist or disable your adblocking software.